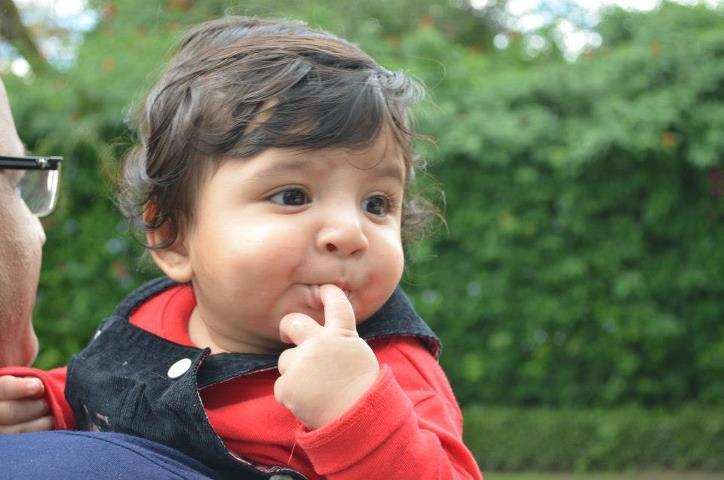 When I came to know that my daughter was expecting a third time, I was not very much excited. The time passed by and the little angel arrived last October. I, along with my wife spent some time with them around October.  In March 2013, we got a chance to be together in Mauritius.  When we arrived in the hotel in Mauritius, I saw the little one lying in pram and looking all around.  I came closer to the pram and he has had a close look at me and gave me a broad smile. I just cannot forget that moment – it was a million dollar smile that he gave me – in fact such moments cannot be weighed in monetary terms.  Such are the divine moments.  I called him and he instantly started shaking his hands and legs as if telling me that he wanted to hug me.  I took him in my lap and sat on a Chair.  I made be stand facing me and started talking to me – what I was talking I really do not remember.  The little angel started replying to my utterances in the same vein as I was talking to him.  I remember having asked him ‘India Chaloge’ – and you know what he started giggling chuckling and his repertoire of vowel-sound coos inspired everyone around.   Every time I repeated this question, he will laugh all the more loudly.  My daughter captured those moments in the camera and even today when I have nothing to do or am feeling low, I run that video and it gives me immense pleasure.

After being together for a week or so, we parted our ways – we came back to India and my daughter returned to Kenya.  We were carrying fond memories of our stay in Mauritius and uppermost in my mind was giggling sound of my grandson – Reyan.

After our return to India, my daughter and I were talking on Skype.  The little one was fast asleep.  However, when he heard me talking to his mother, he opened his eyes and started making noises as if he was seeking my attention.  The camera was focused on him and he looked at me and gave me broad smile and started shaking his hands and legs as if he wanted me to lift him.  That day onwards, I have made it a point to talk to him every day. Talking to him has become part and parcel of my daily routine.  It seems to me as if he also waits for me every day.  I do not know how he is going to react when he comes to India in July this year.  I am anxiously waiting for that DIVINE moment.